“Strength doesn’t just come from abilities and techniques. It also comes from the state of mind and emotions. “

The purple blader (by the WBBA)

Aki-sensei (by Aiger and Amia)

Aki Hayashi ( 林明 , Hayashi Aki) is a character appearing in the anime/manga series, Beyblade Burst Evolution. She gets scouted to BC Sol alongside her brother, Akio Hayashi.

Aki is a young girl with long purple hair, some tied up with a yellow ribbon and has crystal blue eyes.

In Evolution, she wears a lavender off-shoulder over a black tank top. For her bottoms, she wears a plain black short, high white stockings and lavender boots,

In Turbo, she wears a white bubble sleeve shirt with a purple vest over it. For her bottom, she wears a black skirt that reaches at the top of her knees with a black short underneat and a different design of lavender boots.

In Surge, she wears a white dress that reaches the top of her knees with a black lace belt. She also wears a translucent purple vest with short sleeves. For her bottom, she wears a short underneath the dress and brown boots with fur.

Aki is a calm, positive, and a carefree person. She likes to think positive and help people with their emotions when they need it. She’s also shown to be narcissistic at times, and it’s always to play around with people. Even still, she’s insecure about what others think of her.

She acts childish around her friends, most likely around Cynthia.

In battles, she is a different person. She becomes very serious and focused towards the stadium. She also becomes very observant of her opponent’s moves, and comes up wih ideas to counter. Although despite her technique and observing skills, some opponents manage to outsmart her and win against her.

When Aki was at the age of 5, she was given her bey by her father. Her father taught her and her brother blading, but the problem was her launches. Aki couldn’t seem to focus on launching a lot, so her father thought it would be good to make her play archery, since it can help focus and aiming.

Aki was then applied to an archer training camp. She played this sport for about 5 years, and became the top archer in her country. She trained her beyblade along the way, and finally managed her launching style. About 2 years after, she also had a beyblade career. When Kris found out about this, she scouted her and her brother to BC Sol.

Aki has looked up to Free ever since she found out he was the world’s top blader. When she gets scouted to BC Sol, she is surprised to see him.

In Evolution, Aki and Free battled when Aki was trying out to battle against Sunbat United. After the battle (and Aki lost), Free has shown no interest in her yet.

Days later, Aki was the first one to engage a conversation and asked for a battle, in which Free agrees. During the battle, Aki seems to be in full control of her bey and almost took out Fafnir, but still lost. Even though he didn’t show it, he finally gets interested in her.

They rarely conversate whenever around the team, but they always do when they’re both in the forest. As time passes by, they become close friends.

In Turbo, Aki and Free are shown to be closer than the last season. When she saw what Phi did to Free’s bey, she was furious. When she went to Free after the battle and told him that she’ll take Phi on to avenge him in which Free refused, which is a sign that he doesn’t want her to be upset and get her bey destroyed too. Aki was devastated, but she obeys anyway.

Akio Hayashi is Aki’s older brother. He was scouted to BC Sol along with Aki.

Akio makes fun of her when she does something clumsy, or calls her out for unnecessary things which embarasses Aki. Although when Aki is in the stadium, Akio becomes supportive and motivates her from the sidelines.

Aki and Mitsuko are neighbors, and their mothers are very close friends. Aki sees Mitsuko as a little sister.

In Evolution, Aki was surprised when she saw Mitsuko join in the team. But is happy to see that there’s another mutual to join her in the team.

In Turbo, they are first seen together when Aki was helping Mitsuko train and gave her tips battle after battle. When Aki was furious, Mitsuko comforts her by giving her a hug, and Aki calms down immediately.

Blair and Aki are opposites, which is why they have a frenemy relationship. Although when Aki needs to upgrade her bey, she goes to Blair instead since Blair is also a beyblade mechanic and to try to get closer with her.

Blair calls her “Hayaki (希)” which is her last and first name combined, and means hope.

Lui is Aki’s cousin from her mom’s side. When they were children, they always make fun of each other but still have a close cousin relationship.

In Evolution, Lui was surprised when he saw her fighting in a torunament. And when he sees her performance, he decides to battle against her and resulted in winning. Although despite this, he still showed respect towards her, and saw her as a worthy opponent.

In Turbo, they are not seen to be around each other, but still keep contact.

In Surge, when they finally saw each other they battled. Aki lost, but is proud to see that Lui has improved and vice versa.

Aki was first scared by Kris because she was the owner of BC Sol, but finds out that Kris isn’t actually as scary as she thought. Aki would go to her office just to have a conversation with her. When Aki saw the movie that Kris was in, she praised her acting skills, in which Kris becomes flattered.

In Turbo, Kris often pats her head and when she saw her angry because of Phi, she reassured her that Free will be better for a few days, and also asked Ange to cook her an Onigiri.

She met the young girl at BC Sol, and after finding out that she looked up at Aki when she was young, Aki grew flattered and thought it wouldn’t be so bad to be friends with a fan. Aki also taught Amia some Filipino words (Tagalog) and also gives her beyblade tips wheneve she needs them. She refers to Amia as “Ami-chan”.

Aki didn’t like his noisy nature. When they first battled, Valt lost. But Aki saw potential and persistence in him. They talk to each other often, and Aki teaches him whenever Free isn’t around. When they battled again, Valt finally wins and Aki saw him as a rival and friend.

In Turbo, they fist bump each other whenever they meet. Aki still gives him tips and help him train.

In Surge, they talk to each other when Free is training. He also bought her Onigiri, which surprised Aki and thanked him.

Aki also likes to tease him about Cynthia, which results to him getting flustered.

Aiger saw how close Aki and Valt are, so he asked Valt who she is and answered that she’s a blader. Aiger was a bit surprised, since most bladers are male. He asked for a battle and Aki accepted, Aki winning with a ring-out finish. Aiger was even more surprised, but became pumped to battling her and so when they battled again, Aiger won. The male blader reminded Aki of Valt and what he saw in him. Persistent, hard-working and skilled.

Once Aki found out of Aiger’s dark resonance, she confronted him and helped him calm down. She also taught him how to meditate and calm his mind, since this is a serious problem.

Aiger sees Aki as a teacher, and refers to her as “Aki-sensei”. 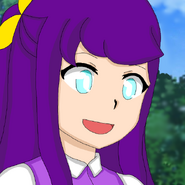 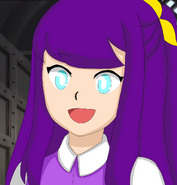 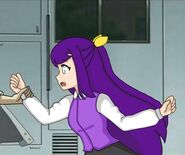 Add a photo to this gallery

She’s so cringe help I can’t even

Anyway, I want to thank @Fluffymochiku for drawing Aki with Raviel and Amia! HONESTLY I’M IN LOVE WITH IT, AND THEY MAKE A GOOD TRIO 🥺❤️

Btw I appreciate your support ya’ll 😔💞

Retrieved from "https://beybladefanon.fandom.com/wiki/Aki_Hayashi?oldid=92448"
Community content is available under CC-BY-SA unless otherwise noted.