The Knights of Concord are an elite group of Beyblader's who's single goal is peace.

The Knights of Concord are normally recognized as the Knights or Knights for Peace. The Knights stand against war, disorder, curruption and conflict. They symbolize a deturrent and will interveen at any given moment in order to restore order. The Knights have only one enemy, that enemy is conflict.

To Become a Knight

Only the leader Sir Desboy, the honorable Knight of One can deem somebody a knight of concord. To become a Knight you must be among the elite of Beybladers and stand against both justice and injustice conserning opression and or conflict.

To Join the Armed Forces

Simply talk any Knight of Concord or a Soldier (Ranked Earl or Above) to join the Armed Forces. Everyone is to start as an "Ensign" unless a Knight of Four or higher recommends otherwise, anyone can be promoted on the spot and by any Knight of Concord. Soldiers are to recognize soldiers of a higher rank, including Knights as authority and take commands as told. Only Knights can override a command from a fellow soldier.

The Knights of Conord Reside at the Bei-Ling Temple. There each Knight lives along with there personal forces. The Knights normally meet at the Ironically round table. The Bei-Ling fortress is completely impenetrable have the ultimate seal of the Solid Iron wall and only Knights know the code to get in. The Knights have 24/7/365/4000 Surveillance and is always on guard.

The other five swords/Keys of Concord are held in the Chamber of Concord in the Bei-Ling Temple for safekeeping.

The Armed Forces of Concord are the Knights secondary fighting force comprized of Beybladers throughout the world of fanon. There is no prejudice among entrees aslong as they fight for peace idolized by the Knights. 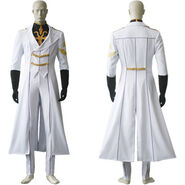