The very beginnings of the universe, a dark time when people were free to create what they wanted without limitation, dimensions were less seperated during this time, allowing beings such as Hack Xes, and Xero Xes to cross over, these inter-dimensional comings and goings resulted in the creation of powerful cosmic organization known as the Nebulos by the Xes brothers, who used their powerful beys to reign terror over unfortunate bladers, and wished to control the universe.

This saw the beginnings of a universal battle system for the universe, it was a prosperous time, with bladers battling to determine who was the best blader in the world, this time heralded the arrival of numerous powerful bladers, although dark times were heralded by the arrival of one such powerful new blader named Gandora.

After the Great War many bladers left to other realms, following their own paths in search of new powers. Few bladers remained in the world, however those that did were driven with the passion to battle their hearts out, two such bladers, Hack Xes, now a changed blader, and Typh, battled continuously everyday, causing destruction wherever they did so, much to the amusement of Mix, who had been released from his imprisonment after being found to have been framed. Hack's power grew so much that he reached a new level of evolution 'Level Monolith'. The energy released from this evolution caused the beys of Mix, and a blader named Joan, to also evolve to 'Level Monolith', however when the three battled the energy given off was enough to shatter them, and they were returned to their original forms, and the 'Level Monolith' form was permanently erased from existence. The event attracted the attention of other bladers, who began to return from their searches for power, this included the return of Des, who took back his position of world leader from Hack, in retaliation to this Hack created an organization called The Mystic Spiral, of which gave leadership to Dragon E. Knight, a pseudonym that Mix was currently operating under. The organization attempted to run the world in a different order, and sought the remnants of power left over from the Monolith energy, which they combined with their own Mystic power, however this combination fractured the universe, causing it to effectively 'reboot'.

The Reboot Generation was the result of the collision of two massive energies, which caused the universe to 'reboot' into a different form, this 'reboot' caused many changes, such as every bey being changed into a new form, as they could not exist in their old forms due to the new laws of physics that governed this 'rebooted' universe. The 'reboot' also saw the return of old faces, and the arrival of many new ones, such as Reco, the human descendant of Hack Xes, the reboot also caused the seal that was placed upon Gandora to be broken, allowing him to return to the universe in the form of TARDIS. TARDIS became the new world leader, and introduced the idea of a 'factions' system of government, where the world was split between four bladers who had been elected as leaders of their respective factions, the leaders were free to run their sections of the world however they pleased, and each faction was represented by an elite team of bladers.

The factions co-existed for a time, solving any conflicts with battle, not wanting a repeat of the Great War, however they soon grew bored, and so TARDIS announced the World Championship, where the four factions would battle each other, and the winner of each battle would earn points for their win, and could take 1 thing from the losing faction, and the winner of the championship would be the faction with the most points at the end of it. The championship ended, and the Gravity Bandits were led to victory by their leader Reco. The end of the championship saw the departure of TARDIS, and the arrival of Mana, who took upon himself to run the world in his absence, Mana got on well with everyone, and established two new factions to replace the four old ones, however it was to peaceful that battles ceased to occur.

Tired of this lack of blading, Mix, the leader of the G.R.A.P.E.S. faction conspired with Reco to control the world in their image of the ideal system of blading. Mix contacted Des, the former leader of the world, who had ascended into a higher plain of existence, to ask him to grant him the power that would allow him to control this ideal world, Des granted him this power, as Mix was his old friend. Mix shared this power with Reco, and the two began their reign over the world. Another blader ascended from this higher plane of existence, noticing the disturbance in the universe that Mix and Reco had created, and tried too persuade Mix to renounce his power, however Mix refused, and the blader called upon assistance from the Gods to force Mix to relinquish his power, and he was sent to the 'Dark Realm' alongside Reco. However the energy used to perform this banishing caused the universe to shift, creating a phenomenon that would later be known as the 'Recursion Shock'.

The Recursion Shock caused new things to happen in the universe, many bey spirits were forced into different forms, some even losing their physical forms, select bladers developed new powers, but the powers threw them into the Dark Realm.

The Void Century was a world turned into a wasteland, with the only battles happening being simulations, and an international force of powerful bladers established to ensure that no real battle took place. Battles were outlawed to allow the world to recover after thousands of years of super-powered battles damaging the world. The blader who had ascended from the higher plane eventually found a way to restore the universe to natural order, however the changes that had taken place during the Recursion Shock were found to be permanent.

The Rebuild Period saw the reconstruction of the world. Real beyblading was reintroduced, after being replaced by simulations for thousands of years. But, because of mass destruction of wars in the past between powerful beys, the ascended blader known as Mana constructed the new beyblades out of weaker elements than the ones used to formerly construct them, resulting in the ones constructed during this period being weaker in power. While he originally planned to take over as the new world leader, Mana instead decided to depart the mortal realm after seeing the way that the people began to set themselves up by looking upon the past to aid in the reconstruction of the world by not repeating the mistake of the previous generations, such as setting up a connected world government system, and creating the international beyblading league, governed by rules to prevent rogue factions like the Orichalcos reappearing and causing mass destruction. Noble houses that claim lineage from prominent Dark History figures, such as the Lunefleur family who are descended from Reco, begin to appear, and collected artefacts from the Dark History to secure their power. Spirits began to return from their exile in the Dark Realm and other reaches, such as the spirit of Xiaolong who returns to be reincarnated into the Xiao dynasty.

Once the reconstruction of the world was completed, a new era was declared, the Zero Era, in which blading is a sport, with Angus and Céleste as current world champions, the Xiao dynasty has received its 89th reincarnation after thousands of years of dormancy. Ramaz Dolsa appeared, and threatened to destroy the world, however they were defeated by a group of brave individuals including the new Knights of Concord and other powerful bladers. Reco reappeared as Reconquista, teaming up with his old friend Psyra to reclaim Apus and return home, triggering a reverse Recursion Shock that undid the changes to the universe caused by the ascended blader.

Xiao Desxinyi searching for the Keys of Concord (circa. DH550)

Hack Xes and Gandora as the Doma Orichalcos leadership (circa. DH2744)

The original Knights of Concord in the Bei-Ling Temple (circa. DH2868) 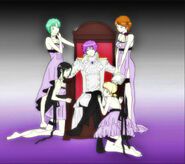 The faction Crimson Storm (circa. DH6139)

The faction Gravity Bandits (circa. DH6139)

The faction Sapphire Emmisaries (circa. DH6139)

Members of the factions celebrate the end of the World Championships, with Sir Des as a special guest (circa. DH6140)

Heroveren des Paradis-Autremonde (later Lunefleur) impressed by a beach on his arrival to Earth (circa. DH10378)
Add a photo to this gallery

Add a photo to this gallery
Retrieved from "https://beybladefanon.fandom.com/wiki/Role_Play_Timeline?oldid=87156"
Community content is available under CC-BY-SA unless otherwise noted.