She is known for being very insecure and timid before a match, sometimes to the point of being clumsy and failing the launch. Her beyblade is Atomic Tanuki.

Tomoka is a girl with pastel pink hair and red eyes. She mostly wears her hair in a ponytail, tied with her characteristic red bow.

Her Beyblade Burst God clothes most consists on a pink hoodie with red cherries, and a yellow shirt with pink and white stripes, with a small animal on the center, which symbolizes the tanuki.

She also often appears with bandaids on her face.

Tomoka is a very clumsy girl, often trips or fall. This is all because of her anxiety of failing, which she tries to stop day by day. She's shy around new people, but tries her best to act like a normal girl. Tomoka is also shown to be very insecure, and often thinks down on herself, scared she may lose and bring her team down.

Later on the anime with the help of her friends she acts more confident on herself, but still with her clumsy actitude.

Before Beyblade, she was a competitive gamer. Very competitive and confident, as she was the number 1 player of Japan. She won every tournament. That was before she lost her first battle against her most hated rival. After she lost, many people were dissapointed in her, and her rivals often made fun of her. This was what made Tomoka a insecure girl.

One day after school, she was walking alone while she found a beyblade on the floor. She never was a fan of these, but was a bit surprised it was just there. She thought the reason of it was because people thought that beyblade was useless, just as people thought Tomoka was the useless one. She felt a conection with it and kept it. She started practicing alone after school, and often doing some battles with other kids. One day Kristina was passing by as she watched Tomoka's bey. She saw her potential and invited her to join BC Sol, which she did.

Tomoka does not appear much in Beyblade Burst, but is often mentioned by Lui, specially when talking to Valt. He would say things such as "You're just like her", refering how both Valt and Tomoka didnt understand their own beys. She also sometimes appear as a backgroud character with Akira.

Tomoka is one of the mayor characters in God, as she is one of the active bladers that participed on the European/World League. She tried her best in every battle, but due to her shy nature she often had problems in battles. Her friends noticed this, and decided to help her. With their help, she became a more confident blader, and helped her team win. She was also one of the chosen bladers to play at the International Blader's Cup, but lost her 4th match against Lui Shirosagi.

Tomoka appears in Chouzetsu training with Lui and Suoh. Aiga was surprised about how good Tomoka was and asked for a battle, Tomoka winning only by luck, since then Aiga considered her a rival. She also appears watching the Longinus Cup. Later she joins Aiga and the others to defeat Hearts at The Dread Tower, almost getting her bey stolen by the phantom thief, Count Night. Finally she tries to stop Phi like all the others, but ended getting her bey destroyed.

Tomoka does not appear in Gachi, but is often mentioned by Aiga and Drum. She is also mentioned to be the one of the mentors of Drum and Delta.

Tomoka was Lui's childhood friend, as they were on the same school. She was always a bit scared of him, but always tried to be nice. After Tomoka transfered school, she never saw him again. That was before she saw him blading and was surprised he also was a blader. Tomoka asked him if he was up for a match, and he told her she wasnt good enough to play against him. Since then Tomoka as always trained hard to beat Lui, and become friends with him again. Later Tomoka shows Lui how much she improved, and he decided she was good enough to play against him.

Akira is Tomoka's kohai, as they both used to go to the same school, and Akira often asks Tomoka for help on his studies. Theyre close friends, and Tomoka really cares about him. Its also shown they are both fans of Zac, and they usually go together to his concerts.

He was Tomoka's first friend after she joined BC Sol. He helped her to understand her bey more, and often practiced together. Tomoka also loves to watch him training outside, mostly to see and pet the deer.

Tomoka was Sisco's classmate, but never really talked with him. One day one of Sisco's friend saw Tomoka playing, and went to tell him, as he was the only blader on the school. The only time they talked was when Sisco went to ask Tomoka for a fight, in which she got so nervious she lost. They never talked again after that, until Sisco joined BC Sol. They both were very surprised but also very annoyed about it. After one more battle, Sisco forced Tomoka to do a "special training" with him, as he couldnt stand having someone so weak on his team. After some training he noticed Tomoka's insecurity, and tried to help her since he thought that was the reason of her weakness. The became closer after that, and finally friends.

Tomoka met Suoh when he was a little boy, training with Lui. They often practiced together when Lui wasnt around. Tomoka was also the one who introduced Suoh to ikebana (flower arranging). Over time they became good friends and their relationship was like brother and sister, as Suoh called Tomoka "Nee-chan" (big sister). Suoh also admires Tomoka, and would often try to impress her with ikebana.

She never appears with Drum, but he mentioned she was one of his mentors. He also respects her, often calling her "Onee-san" (Big sister)

Just like Drum, Tomoka is one of his mentors.

Tomoka in her school uniform 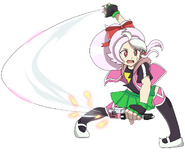 Tomoka in her Sparking outfit 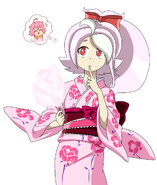 Add a photo to this gallery

More extra information about her on her toyhouse!

Retrieved from "https://beybladefanon.fandom.com/wiki/Tomoka_Akarumi?oldid=91572"
Community content is available under CC-BY-SA unless otherwise noted.